Challenging Legacies: The Kingdom of Iraq and Gertrude Bell 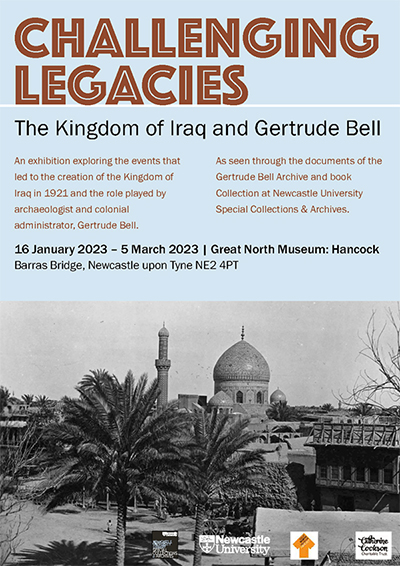 Newcastle University's exhibition Challenging Legacies: The Kingdom of Iraq and Gertrude Bell is now open at the Great North Museum and will run until the 5th of March 2023.

The exhibition will examine the events that led to the creation of the Kingdom of Iraq in 1921, considering the impact and legacy of the First World War and the British administration on the country. It will feature archival material and newly digitised images of the landscape and the people of Iraq, exploring its rich heritage and culture whilst also whilst telling the story of Gertrude Bell's involvement in the region.

Admission is free of charge and aimed at a wide audience and age range.

More information can be found on the Great North Museum’s website.

The Anti-Suffrage Anomaly: Gertrude Bell and the Question of Privilege, Online Exhibition, 2020

Created by English Literature student Eleanor Brown as part of her ‘Exhibiting Texts’ module, The Anti-Suffrage Anomaly is an online exhibition which considers the ways in which societal expectations of gender can be defied through privilege. Using Bell’s opposition to female suffrage a focal point, it explores the ways in which her personal privilege can be said to have separated her from the typical limitations of women at the time.

The Extraordinary Gertrude Bell at The Great North Museum, Jan - May 2016

In 2016, Newcastle University collaborated with the Great North Museum to create The Extraordinary Gertrude Bell, an exhibition investigating Bell’s life and career through the themes of archaeology, politics, and exploration.  The exhibition featured material from the Gertrude Bell Archive held at Newcastle University as well as objects loaned from the British Museum, Imperial War Museum, and the Royal Geographical Society.

Curated by Dr Emma Short (School of English, Newcastle University), Major Miss Bell explored the impact of the First World War on Bell’s life and legacy. Using material from the Gertrude Bell Archive, the exhibition highlighted the oft-overlooked range and extent of the work Bell undertook during the War, which took her from Boulogne to Baghdad.